Richmond Region’s Housing Squeeze: As Prices Rise, More Residents Are Shut Out of Homes That They Can Afford

Since June, the MVA team has been working to analyze and document housing trends in the City of Richmond, Henrico County and Chesterfield County.

This newsletter will focus on one particular set of numbers that emerged during the MVA data analysis process:  The Richmond region has seen a sudden and sharp decline in homes most people can afford.

When costs climb so quickly — average home sales prices across the region rose by 9 percent in four years to $383,000 — a growing number of potential buyers have more trouble finding houses.

Take a look at renters, a substantial potential population of first-time home buyers. To afford a house priced at $250,000, a buyer needs a household income of roughly $83,000. But only about 1 in 4 white renters can afford a home at that price. For Black and Hispanic renters, only about 1 in 10 makes enough money to buy a $250,000 home.

The shrinking share of less-expensive homes makes it doubly tough for first-time and lower-income buyers. For one thing, they’re shut out of even more neighborhoods than they were just four years earlier. And in such a competitive market, sellers are routinely and quickly accepting above-asking-price offers with waived contingencies and aren’t willing to wait for buyers who need FHA loans or help with closing costs.

“It’s not just an issue that affects the poor,” said Carolyn Loftin, director of programs at Urban Hope, a faith-based affordable housing nonprofit in Richmond, and an MVA steering committee member. “Housing affordability will soon start affecting people who are higher on the totem pole over time.” 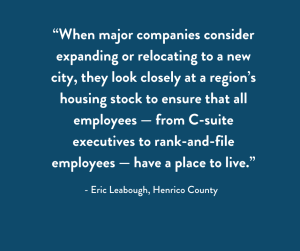 Rising home prices also have implications for economic development, said Eric Leabough, director of community revitalization for Henrico County and an MVA steering committee member. When major companies consider expanding or relocating to a new city, they look closely at a region’s housing stock to ensure that all employees — from C-suite executives to rank-and-file employees — have a place to live.

“With these rising home prices,” he said, “are we able to meet the needs of the workforce that are looking to locate here?”

Multiple factors are contributing to this shrinking share of homes that most region residents can afford.

Among them: Land prices and construction costs are rising, which drives up the prices of new homes. Most builders are targeting higher-end markets. And many seniors and other established homeowners are holding onto their homes longer because rising rents and home prices leave them few options for downsizing, especially in the communities where they’ve lived for so long. If they sell to home-flippers who are aggressively seeking properties in affordable neighborhoods, those houses come back on the market after extension renovations and a price tag that’s out of reach for many low and moderate-income buyers.

Here’s another one: The foreclosure crisis of the 2000s removed a lot of affordable housing from several areas around the region, most notably in Richmond’s Church Hill and Jackson Ward neighborhoods. Foreclosed properties were bought cheaply, then renovated and resold at significantly higher prices. Because subprime lending and subsequent foreclosures were concentrated in majority Black neighborhoods, this loss of homes — and the wealth accumulated in those homes — contributed to Black homeownership rates in the City of Richmond falling by 6 percent over the past two decades.

The MVA data on the shrinking inventory of affordable homes “is confirmation that a lot of folks in the region are being pushed out, if you will, of these opportunities,” said Jovan Burton, executive director of the Partnership for Housing Affordability and an MVA steering committee member. It’s not just people looking for home-ownership. It’s people who are currently in home-ownership positions as well.”

For a deeper dive into the reasons for and the consequences of this shrinking share of homes selling at $250,000 or less, click here to see the Richmond Regional Housing Framework, a data-driven cooperative effort to address and find solutions for shared housing challenges in communities throughout the Richmond area. The Partnership for Housing Affordability published the Framework in 2020 and recently released an update on the region’s progress in meeting housing goals.

It’s clear that the Richmond housing market is red hot these days. Redfin, the real estate brokerage firm, gives the City of Richmond an 84 (out of 100) on its competitiveness scale because many homes are getting multiple offers and are selling quickly and above list price.

But the median home prices in Richmond (up 9.1 percent year over year, according to Redfin), Henrico (up 6.5 percent) and Chesterfield (up 6.7 percent) aren’t rocketing up like they are elsewhere — at least not yet. The 30 large-city markets with the biggest year-over-year jumps have seen home prices climb by between 22 percent and 45 percent.

Housing that’s unaffordable — generally defined as when a third or more of a household’s income goes toward mortgage or rent — hurts families in many ways. Three MVA steering committee members speak about the potential consequences of a decline in affordable places to live in the Richmond region:

“When people don’t have access to affordable housing, shares Eric Leabough, Director of Community Revitalization, County of Henrico, they have to make other sacrifices. It may be medical related. Are they paying more money to stay stably housed and not making those important purchases — medication that’s needed or preventative measures to take care of their health or educational opportunities or enrichment activities for their children. We know that kids do better in school when parents have the ability to involve them in other activities outside the normal school day. So if their parents are taking that money they would normally put toward those activities (and spending it on housing), then the child is impacted.” 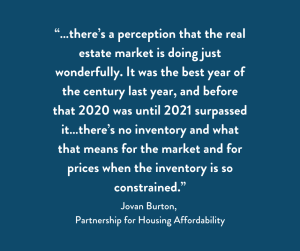 Jovan Burton, Executive Director, Partnership for Housing Affordability believes that, “for most folks in this space, there’s probably a perception that the real estate market is doing just wonderfully. It was the best year of the century last year, and before that 2020 was until 2021 surpassed it. I think what people don’t understand on the other side is that there’s no inventory and what that means for the market and for prices when the inventory is so constrained.”

“When our affordable housing stock shrinks, states Carolyn Loftin, Director of Programs, Urban Hope, I feel like that’s a clear indication that homelessness is going to be on the rise. What people are making in livable wages versus what it actually costs to live in a community — they’re not rising together. … When you remove affordable housing out of a neighborhood, that means that the people who can’t afford are being pushed out. What we are seeing in the city of Richmond and a lot of cities all over the nation is that there are no places that are affordable. And if they are quote-unquote affordable, they’re in very harsh condition. Health is being affected by it. Kids are not receiving good education because they’re in communities that are doing so poorly because there aren’t enough taxes to pour into the schools. Not to sound cliché about the children being our future, but (the lack of) affordable housing is actually affecting our ability to produce kids who will be making the decisions for our communities.”

A second Market Value Analysis of the Richmond region is now underway. The first MVA, completed in 2017, analyzed detailed housing market data (home sales, building permits, vacancy rates and other statistics) and U.S. Census data and listened to voices from throughout the community to present a geographically detailed picture of the housing market in the City of Richmond, Henrico County and Chesterfield County.

The second MVA will examine the changes that have occurred over the past four years so policymakers, grantmakers, potential investors, advocates and the general public can see the effects that prior investments and the COVID-19 pandemic have had on the region’s housing market. The new MVA is expected to be completed in late March.

The MVA is driven by a unique combination of organizations: PlanRVA, a regional planning agency; Richmond Memorial Health Foundation, a foundation that fosters an equitable and healthy Richmond region; and Reinvestment Fund, a community development financial institution based in Philadelphia. Together, these organizations have recruited community leaders to steer this effort. Click here to see the members of the MVA Steering Committee.

The new MVA will inform a critical discussion at the intersection of health, racial equity and housing – issues of critical import to the Richmond region.

To learn more about the MVA effort, contact Martha Heeter at mheeter@planrva.org.